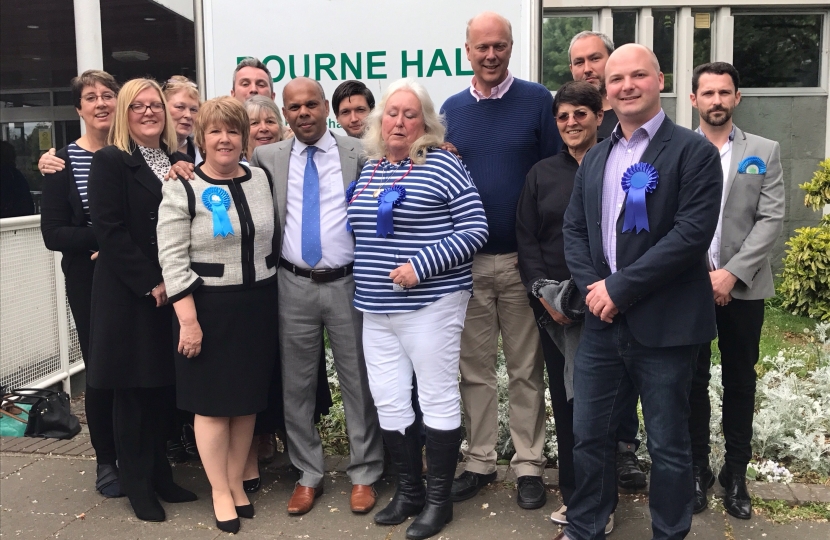 We're delighted to report of our success in Thursday’s county council elections. Both Tina Mountain and Bernie Muir were elected as county councillors for Epsom.

Tina Mountain has been re-elected as the county councillor for Epsom Town & Downs with an increased majority. This seat was held by the Residents’ Associations between 1997 - 2013 and it is down to Tina’s hard work as an excellent local representative that she has held the division for the Conservatives. Tina secured 42% of the vote and has a majority of 430 votes.

Epsom West was won by Bernie Muir who successfully defended the smallest majority in all of Surrey (21 votes over the Residents’ Associations). Epsom West was a Lib Dem seat between 1993 and 2015 when it was won by us in a by-election. Bernie won this year’s contest in a hard fought four-way marginal and increased both our majority and share of the vote (74 votes and 30%). Bernie was a first time candidate and a wonderful one at that being tireless in getting out and meeting the voters. We have no doubt she’ll be a fantastic county councillor.

In Ashtead Chris Hunt put on an impressive performance against an entrenched Independent incumbent adding 445 votes to the Conservative tally and increasing our share of the vote to 35%. He and his team worked incredibly hard and were a credit to the Party.

Elsewhere we commend Stephen Pontin, Alex Clarke, Karan Persand and James Tarbit who came second in their respective divisions whilst all increasing the Conservative vote.

We’d like to thank all our members and supporters who helped us achieve these fantastic results. This was a real team effort and we are extremely grateful for your continuing support.

Finally we'd like to thank all those who turned out and voted Conservative. We thank you for your trust in us and we will continue to work hard for our local communities.