Born in 1962, Chris grew up in Buckinghamshire, though his family moved to the North West when he was 19. He was educated at the Royal Grammar School, High Wycombe before going to Sidney Sussex College, Cambridge, to read history. After university, he joined the BBC's News Training Scheme, and worked as a producer on BBC News and Channel Four's programme Business Daily.

After a few years in television production, he decided to move to the business side of the media industry, and worked for a number of small and medium-sized production businesses before moving to the Employee Change Communication practice at international communications firm Burson Marsteller. He ended his time there as European Marketing Director.

Chris lives in Ashtead, Surrey, in his constituency of Epsom and Ewell. He has written several books, including a history of the Bridgwater Canal, Anglo-American relations, and life in England after the First World War.

Before entering Parliament in 2001, he was a councillor on the London Borough of Merton.

Chris has been at the forefront of the ongoing battle to save Epsom Hospital, in the face of NHS plans to downgrade it and move services to distant hospitals in Greater London. During the course of the campaign he has organised petitions that have attracted support from tens of thousands of people and organised public meetings attended by thousands of local residents.

Watching and supporting Manchester United, Epsom and Ewell FC and Ashtead Colts, while trying to emulate their skills in occasional bursts of 5-a-side football.

Chris has been married to Sue since 1987, and they have one daughter and one son.

You can find out more about Chris and his recent activities at his website www.chrisgrayling.net 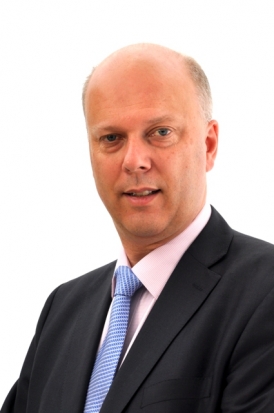